Established on 28 August 1958 under the initiative of Tunku Abdul Rahman, the first Prime Minister of the newly independent Malaysia, the National Art Gallery started with a donation of 4 artworks and was housed in a borrowed space at the Dewan Tunku Abdul Rahman – Malaysia’s first House of Parliament.
Today, with a permanent collection of more than 2500 pieces of artworks – the National Art Gallery is in its permanent state of the building officially launched on 16 September 2000 by former Prime Minister Tun Dr Mahathir Mohammed.

An agency under the Ministry of Culture, Arts and Heritage, the National Art Gallery is one of the most established art museums in South East Asia. As Malaysia’s official art institution, it has supported the endeavors of Malaysian artists through exhibitions locally and internationally since the early sixties. 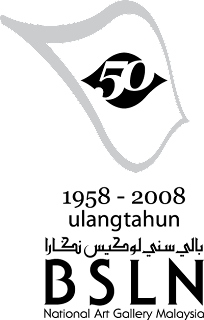 The National Art Gallery is located on Jalan Temerloh, off Jalan Tun Razak on a 5.67 hectare site neighboring the National Theater and National Library.The unique architecture of the gallery incorporates elements of traditional Malay architecture, which combined with contemporary lines has distinguished the complex as one of the most modern art venues in the region. A short distance from the Kuala Lumpur City Centre, the Putra World Trade Centre and the major hotels of Kuala Lumpur, the gallery is a popular venue for visitors to the city.
Source info: www.artgallery.gov.my